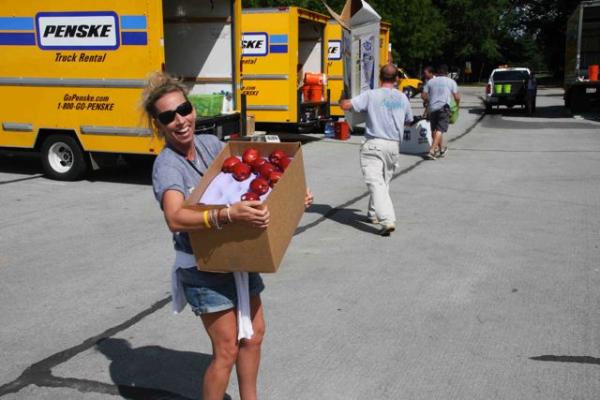 Each year, thousands of riders, volunteers, and virtual riders (fundraisers) participate in Pelotonia, a grassroots bicycle tour that has raised over $95 million to date for cancer research. Launching in 2009, the organization donates 100% of every dollar raised directly to The Ohio State University Comprehensive Cancer Center and Solove Research Institute.

As lead volunteer, Elizabeth and the team keep their eyes on the 100 mile riders crossing the finish line, and place the 180-mile riders back on their bikes the next day for the final leg to New Albany.

“I jumped in as a lead volunteer the first year when I heard about it and I’m still so proud to be associated with Pelotonia. I come back every year because we are actually making a difference. We’ll exceed $100 million in seven years… that’s making a difference… I’m inspired by Pelotonia’s purpose, the courage in people’s stories and the HOPE.  It’s the highlight of my year and anyone that knows me would tell you I light up just talking about it!”

Elizabeth also helped to organize Safelite’s growing involvement with the charity event and leads a group of associates to support the company’s team and fundraising efforts.

“While I’ve volunteered as an individual for my own reasons, it’s been even more rewarding to combine efforts at work with a planning committee and associates that share my passion for this event. Our goals are simple – to give employees a chance to be involved and to give back.  The response from Safelite associates in two years, gives proof they believe in One Goal.  To End Cancer.” Elizabeth said. “With Safelite’s headquarters here in Columbus it was only natural to continue our locally driven mission by showing our support.”

On track to break $100 million in seven years, Pelotonia is a true success. It’s growing larger each year, bringing more participants, advancing treatment and prevention of cancer, and changing lives.