Tips for Avoiding These 4 Road Obstructions 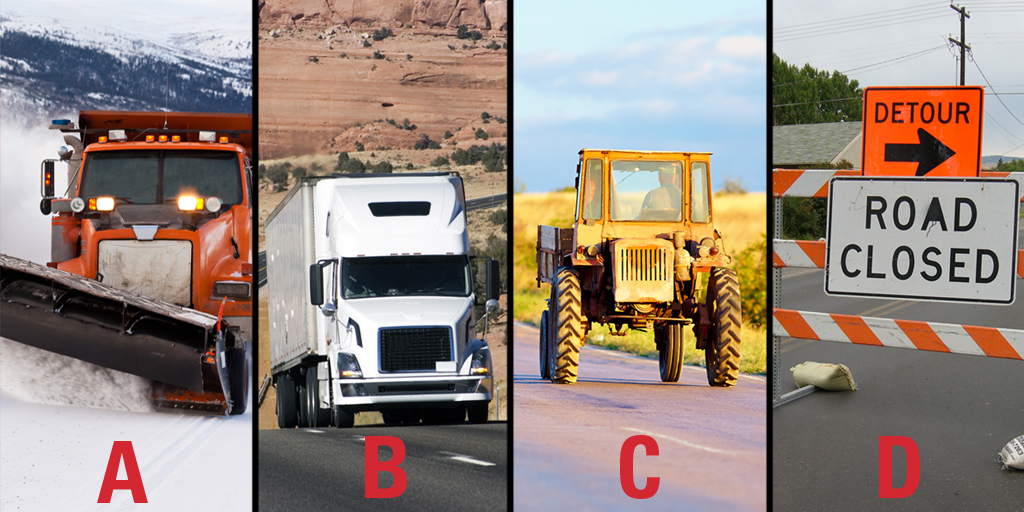 It’s another winter morning, and you wake up to a fresh dusting of three inches of snow. As you get ready for work, you find you’re running late. You already know it’ll take longer to get to work because of the snow, but once you’re on the road, you get stuck behind a slow-moving semi-truck. Can things get any worse?

Many of us have found ourselves in similar situations, but these frustrating moments are when safety is needed the most. Why? Because driving near vehicles like semi-trucks, snow plows, tractors or other large road obstructions can lead to flying debris hitting your windshield, auto damage and even car accidents. When you find yourself faced with one of these obstructions, follow these tips to avoid them and keep yourself safe, especially during the winter.

Following too closely is dangerous no matter what vehicles are involved, but it’s especially dangerous with semi-trucks. If you’re driving too close, chances are the driver doesn’t even know you’re behind them – they can’t see you. Also, semi-trucks are notorious for kicking up gravel, rocks, salt and snow, which can lower your visibility and even damage your auto glass.

Here are some tips to follow: Always drive a safe distance (at least two car lengths) behind a semi-truck. If you’re in a passing lane next to a truck, avoid driving next to it for very long. When you decide to pass a semi-truck, pass – don’t ride along next to the truck. Especially in winter, never drive close to a semi-truck. This includes being behind it, in front of it, next to it or even turning in front of it. Keep a safe distance at all times.

Due to a snow plow’s wide size, they may sometimes cross the centerline or shoulder of a road. This means you should never follow too closely and, if possible, avoid passing. Snow plows are notorious for producing a large snow cloud which can decrease driving visibility substantially.

Additionally, snow plows typically travel below the speed limit. Be aware of your speed as you approach a snow plow, and make sure you give yourself plenty of time to slow down. A snow plow driver may have restricted vision, so you may see them before they see you.

While you may want to avoid a snow plow because of its slow speeds, when weather conditions are poor, it’s not a bad idea to stay behind the plow (at a safe distance). This allows you to travel on a plowed road rather than a snowy, slippery road. This is especially convenient when snow is falling and covering the roads quickly.

Tractors are oftentimes large, slow moving road obstructions that can cause traffic backups and dangerous driving from frustrated drivers. Sometimes coming across a farming tractor while driving is inevitable, and in those situations, it’s important to make safe driving decisions – like only passing when the road is clear and weather conditions are fair.

Also, remember that farm equipment may be wider than a typical vehicle, so allow enough room between your vehicle and the tractor when passing. Always yield to wide vehicles, and don’t assume the driver of the farm equipment knows you’re there. You can avoid tractors by passing with caution, but remember that not every farm vehicle that pulls to the right side of the road is letting you pass or turning right. Sometimes farm equipment requires wide left-hand turns, meaning the driver will veer right before executing the turn.

A detour can set your travel time back significantly, making you late or putting a damper on your day. The best way to avoid a detour is to be aware of one before you hit the road. For example, Google Maps for the iPhone and Android can automatically gauge road obstructions like detours and traffic so drivers can avoid them. The app will suggest alternative routes if there are reports of delays, detours or traffic on the existing route.

If you’re forced to take a detour and you’re unfamiliar with the route, drive the speed limit and always maintain a safe distance from any other vehicles. No matter how much time the detour takes, it’s sure to be less time-consuming than a car accident would be.

Road obstructions like semi-trucks, detours, farming equipment and snow plows may seem like a burden when you’re on the road. When possible, avoid being near these types of obstructions by keeping a safe distance, passing only when safe and making smart decisions. Especially during the winter, you can never be too safe on the road.